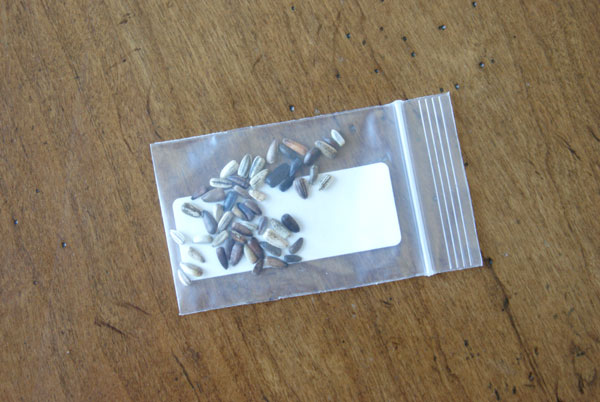 Sometime in April (about 3 months ago) I planted some sunflower seeds in a small patch of our backyard. It really is amazing how a little seed can grow so big in just a few months! The sunflowers are now 4-5 feet tall and seem to keep growing taller each day. 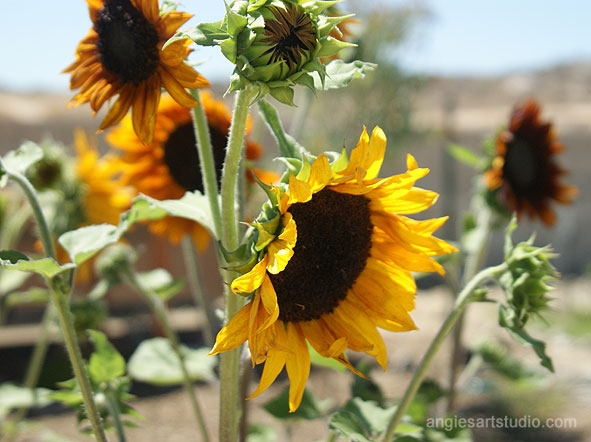 Watching their cheery faces gradually opening up sure makes my heart smile :)

Did you know that there are hundreds of small flowers within a single sunflower? What is usually called the “flower” on a mature sunflower is actually a “flower head” that contains numerous florets, (small flowers) crowded together. The florets inside the circular head are what turn into seeds.

Here is a bee busy feeding on the nectar of florets that have opened. As you can see there are many more florets in the center that still need to open. I love the interconnecting spiral pattern that emanates from the center – nature is marvelous. 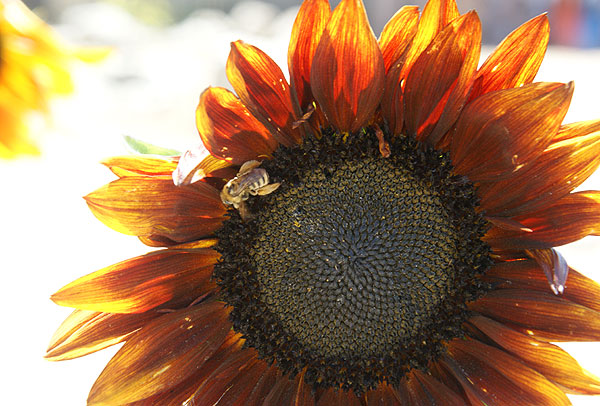 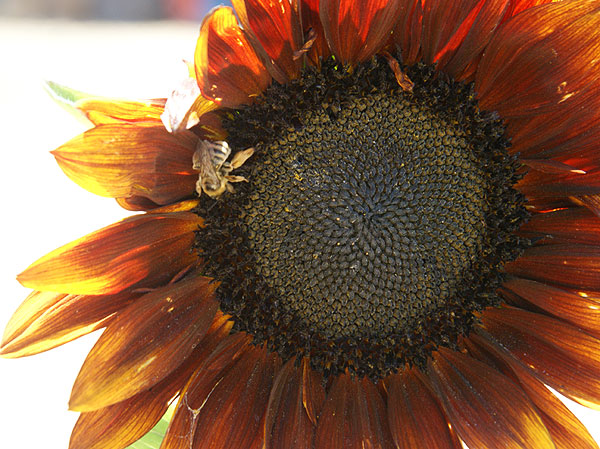 Speaking of little things growing into big things, back in February we came home with 5 fluffy baby chicks – OMG they were sooo small and cute and fun to watch! I’m guessing that they were 3-4 days old when we brought them home. 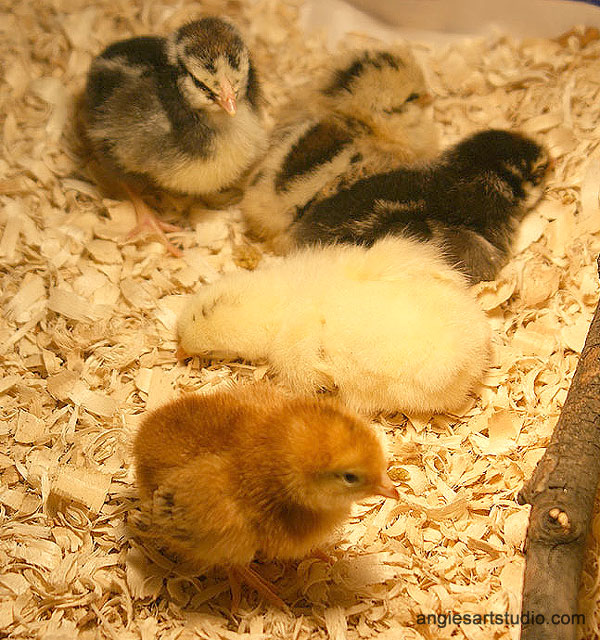 4 months later, “our girls” have grown into very fine and pretty looking birds. They still keep me entertained and I’m really looking forward to them laying eggs which should be in the next month or two, but most of all I am thankful that they are healthy and happy. 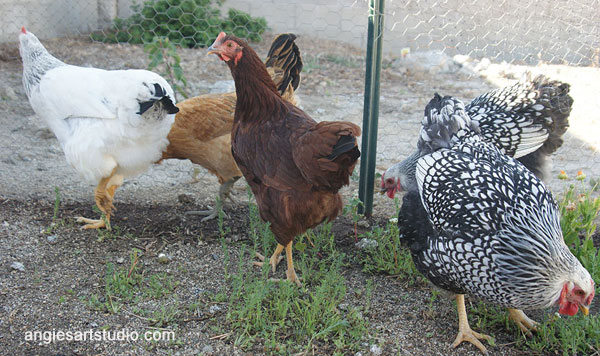 Since raising these chickens, I have learned that chickens can have different type of combs depending on their breed. 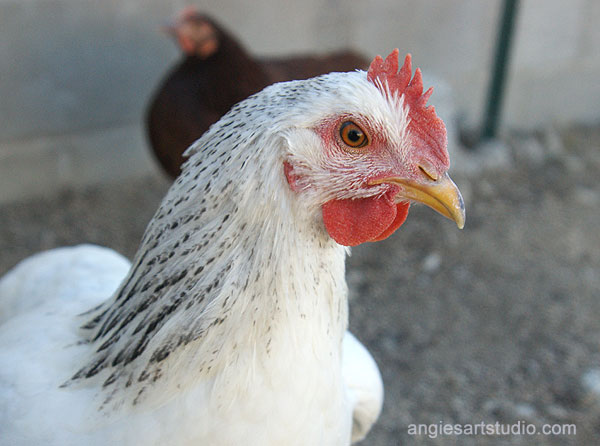 Freckles has a single comb – this is the most common comb type which people are more familiar with. I think Freckles is a Delaware Chicken. And like people, chickens have their own personalities. Freckles is by far the most inquisitive of the flock, the one who leads the others to mischief. As I was taking the photos she would come right up to the camera and peck at the lens and she is always the first to jump the fence. 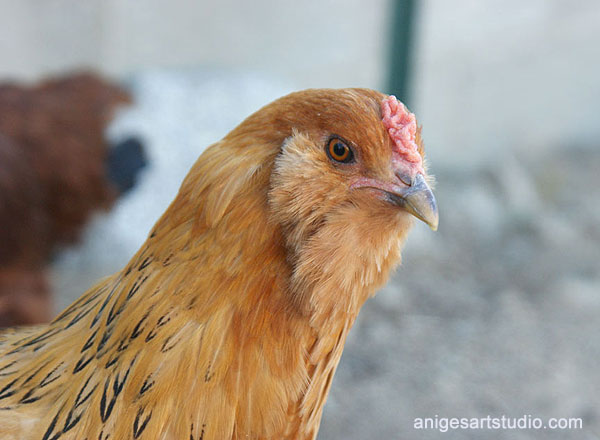 Milly has a pea comb which is characteristic of the Ameraucana breed of chicken. I think she is an interesting looking chicken with her bumpy and lumpy comb and boofy cheeks and no wattles! Milly is quite friendly and will sometimes stay close and let me stroke along her head and back. Chicken feathers are so smooth and soft. 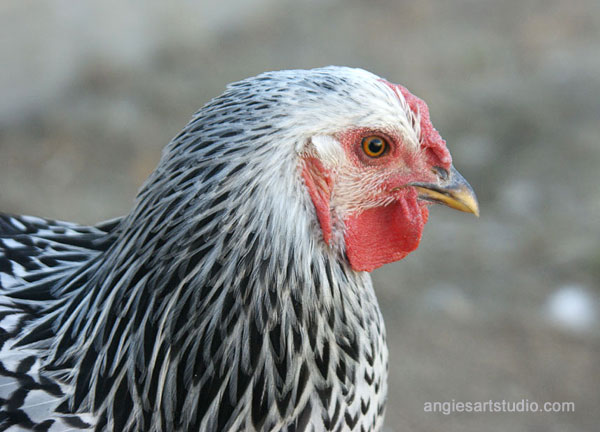 This is either Rose or Diamond because we have two Silver Laced Wyandottes that look very similar. When they were chicks we could tell them apart by their markings, but as they got older, their markings became more and more alike. Anyway, these two chickens have rose combs, which are broad, low and flat. 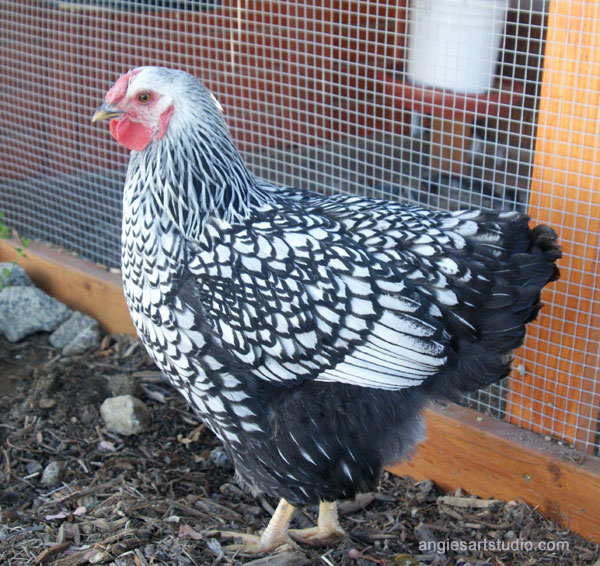 I love the look of their black and white feathers, however don’t be fooled by how gorgeous looking this Wyandotte is, because she is the bossiest and meanest of the bunch. I often see her pecking at the others and sometimes succeeding at pulling out feathers causing a loud squawk from her victim! 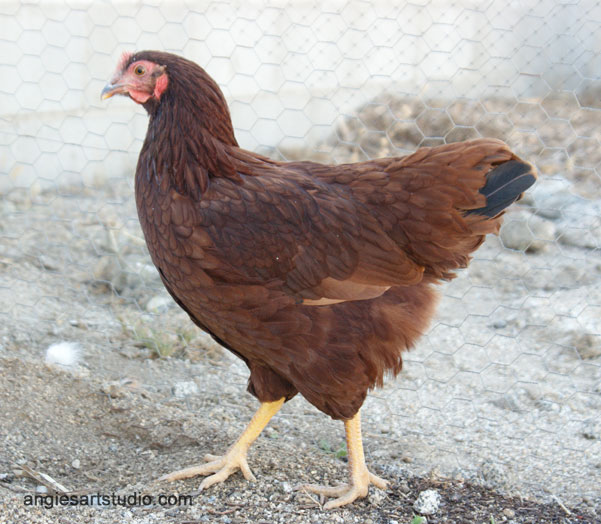 Red is a Rhode Island Red and is the most petite of the 5 girls. She also has a single comb like Freckles, but for whatever reason it is not as pronounced, same goes with her wattles. Even though she is the smallest, she can still hold her ground in the pecking order and will not tolerate being picked on. All in all, there is not too much squabbling that goes on and the girls seem like good friends. 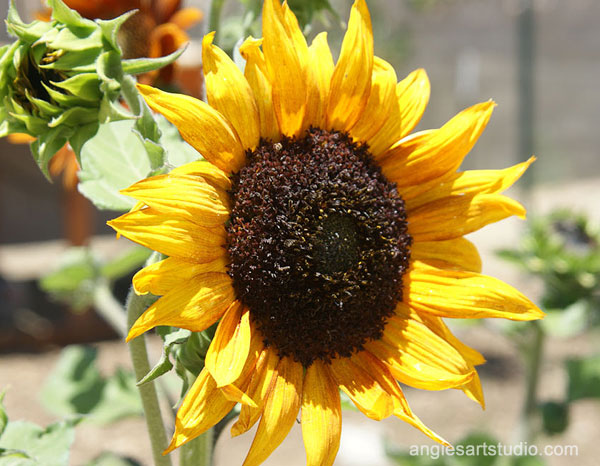 As the sunflowers mature and become brown and dry I will be able to harvest the seeds to feed to the chickens and save some for more planting to begin the cycle again.

Leave a Reply to Angie